IV Nutrient Boosters in Scottsdale - Health Inside Out& Wellness

Vitamin & Nutrient IV Boosters or (IM) Injections can be added as a follow-on through the IV or by intramuscular (IM) injection. These IV and injection boosters are easy to administer and provide healthy persisting wellness for days.Vitamin & nutrient Booster injections deliver essential elements directly into our bodies and produce a reservoir for continuous Vitamin & Nutrient release. The list below indicates whether the nutrient is administered through IV, IM injection, or is available both ways.

Individual treatments are tailored to each patients unique needs. 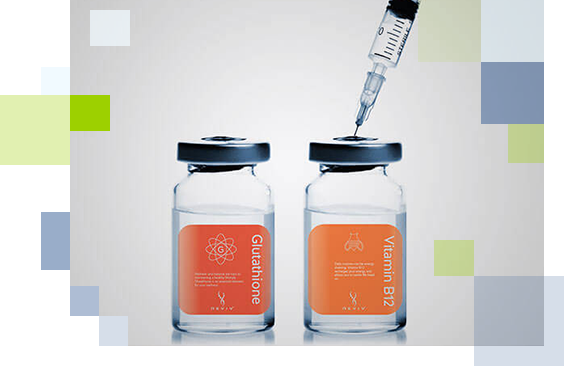 (IV, IM)    Glutathione is the master antioxidant and detoxifier of every cell in our bodies. It is a tripeptide composed of three amino acids- cysteine, glutamine and glycine. It is the most important antioxidant produced by our bodies, reducing cellular damage caused by free radicals and peroxides, and it is essential in phase I and phase II liver detoxification reactions.

(IV)    Alpha-lipoic acid (ALA) is an antioxidant that's in many foods, and is made naturally in our bodies. ALA improves diabetic peripheral neuropathy, glaucoma, MS, hepatitis C, prevents nuclear radiation damage, and is an antidote for poisonous mushrooms.

(IM)    M.I.C. is an acronym for Methionine, Inositol and Choline. These compounds are called lipotropic because they help stimulate the breakdown of fat and reduce the storage of excess fat in the liver and other tissues.  MIC is commonly used today in intramuscular injections as one component of weight loss programs.

(IV, IM)   AMP is Adenosine Monophosphate also known as AMP. AMP naturally occurs in the body and increases energy. It has been used to treat chronic fatigue as well as having positive effects on weight loss. Adenosine may also boost metabolism and increase cellular energy.

(IV)   Biotin, or Vitamin B7, is a water-soluble vitamin that's a part of the vitamin B complex — a group of key nutrients needed for healthy metabolic, nerve, digestive and cardiovascular functions. Biotin acts as a coenzyme in the body that's needed for the metabolism of fatty acids, amino acids and glucose.  It is often used in oral supplement form to support healthy hair, skin, and nails.

(IV, IM)   Coenzyme Q10 (CoQ10) is a substance similar to a vitamin. It is found in every cell of the body. Our bodies make CoQ10, and our cells use it to produce energy our bodies need for cell growth and maintenance. It also functions as an antioxidant, which protects the body from damage caused by harmful free radicals. CoQ10 is helpful for fatigue, fighting cancer, and to counterbalance CoQ10 depletion from cholesterol-lowering statin therapy.

(IV, IM)    Carnitine is a substance found in almost every cell in the body, and biosynthesized from the amino acids lysine and methionine. Carnitine’s primary role is regulation of fat metabolism by increasing the rate at which the liver burns fats and creates energy.  It acts by carrying fat across the mitochondrial membrane and is very important in providing energy to muscles, including heart.

(IV)  NAD (Nicotinamide adenine dinucleotide) is one of the most important coenzymes in the cell. Not surprisingly, NAD and the closely related NADP are the two most abundant cofactors in  the eukaryotic cell. Healthy bodies make all the NADH they need using vitamin B3 (also known as niacin, or nicotinamide) as a starting point. –  Good for Anti-aging, Memory, Focus, and Endurance

(IV)   PC (Phosphatidylcholine) is a chemical contained in eggs, soybeans, mustard, sunflower, and other foods. The term "phosphatidylcholine" is sometimes used interchangeably with "lecithin," although the two are different. Choline is a component of phosphatidylcholine, which is a component of lecithin. PC helps to promote healthy cognitive function and is the predominant phospholipid in all cell membranes, including brain cell membranes.  PC is primary helpful for liver damage from alcohol, pharmaceuticals, environmental toxins, and infections such as hepatitis, and also induces a marked reduction of cholesterol levels.  PC helps to increase HDL, the ‘good’ cholesterol; reduces triglyceries; and lowers the microviscosity of LDL, the ‘bad’ cholesterol i.e. eases blood flow.

(IM)    Vitamin D3  - 50,000 0r 100,000 IUs.  Vitamin D3 manages calcium in our blood, bones and gut and helps cells all over our bodies to communicate properly.  Our bodies must have vitamin D to absorb calcium and promote bone growth; too little vitamin D results in soft bones in children (rickets) and fragile, misshapen bones in adults (osteomalacia). Vitamin D is also an important factor in our immune system health, reducing our risk for infections, auto-immune diseases, cancer, and allergies.

(IV)    MSM (Methylsulfonylmethane) is a naturally-occurring compound found in large quantities in nerve tissues, skin, joints and hair.  MSM is a form of organic nutritional sulfur found in fruits, meats, grains and dairy products, which specifically can be found in broccoli, cauliflower, Brussel sprouts, tomatoes, asparagus, peppers, onions and cabbage with the highest natural concentration of MSM found in mother’s milk.

One of the most remarkable discoveries with MSM is that it is an effective pain killer, often effective for all sorts of chronic pain.  MSM works as an anti-inflammatory and an antioxidant and can benefit patients experiencing neuropathic pain, rheumatoid arthritis, fibromyalgia, osteoarthritis, and many other conditions.

(IV)    Hydrogen Peroxide (H202)   Yes, hydrogen peroxide can be utilized intravenously, and is actually produced by our bodies as an antimicrobial agent and immune cell stimulant.  It acts to increase oxygen available to all tissues, and has a wide range of effectiveness.  Because the treatment increases oxygen availability, whether due to the direct effect of the oxygen produced by the hydrogen peroxide or the secondary manufacturing of oxygen by the body in response to the hydrogen peroxide, it is a basic treatment that can be used with almost any other therapy in almost any disease.  The peroxide is always given separately and not mixed with other agents.